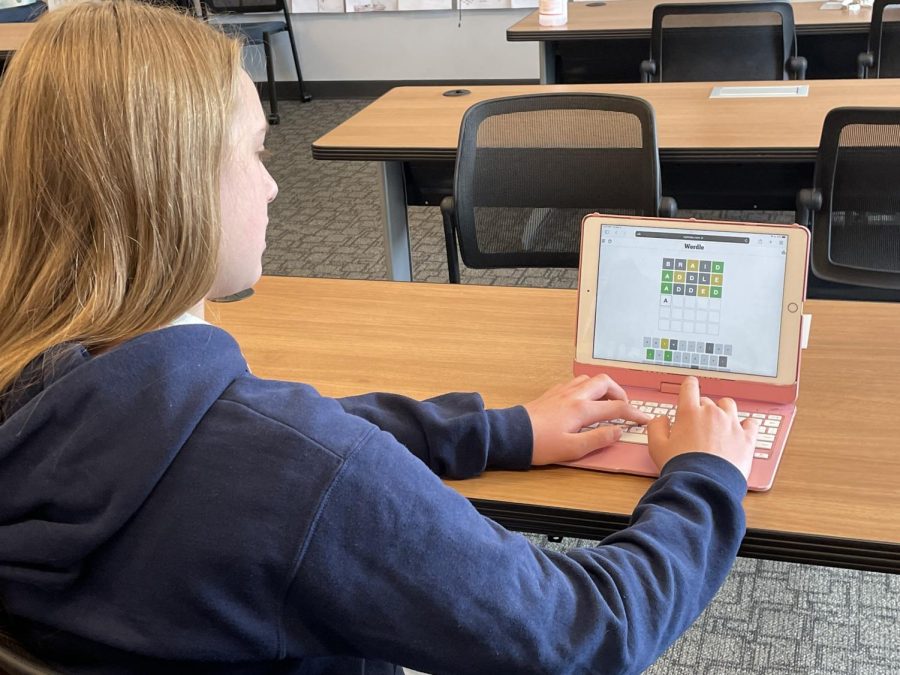 Crane. Irate. Adieu. Canoe.  Some think that these words are the best words to start with in Wordle.  These are the words that will guarantee you the most success.  Wordle is a word game where you have to guess one five letter word in six tries. It was first made public in October 2021, but catapulted into popularity in January and February of 2022.

On the average Depaul Prep school day, you will see students solving the Wordle, talking about the Wordle, and some desperately trying to shield themselves from the day’s spoilers.

Freshman Larysa Butenko has been playing Wordle for a couple weeks and likes that it “makes your family members and friends compete against each other about who gets the highest streak or who gets it right the fastest, so it gives an aspect of competition.”

But Wordle is not just popular among students. Many staff members play it too. History teacher Mr. Spillane likes playing Wordle because it gives him a “sense of superiority when it works out and it’s a nice little escape from the rest of the day.”

Wordle is a pretty simple game, but for those ambitious enough, there are variations of Wordle to challenge your mind even further. Theology teacher Mr. Galvez said, “I try the one called Quordle which gives you four different words and you have eight guesses you can try to get all four words.”

Ukrainian Wordle is a lot harder than regular Wordle because depending on where you’re from, there can be multiple ways to say one word, which makes it harder to figure out words that would fit the five letters.”

In a way, Wordle itself is a spin-off of many ideas that have come before it.  Some compare Wordle to Mastermind, a board game where instead of letters, you guess a series of colors until you get the right pattern.  Others think of Jotto, a game where there is one secret word and for every word you guess, you are told how many correct letters you had. Wordle seems to be a blend of both of these games and that perfectly encompasses why Wordle is so popular. Wordle is simultaneously simple and difficult, while also bringing in the aspect of competition that excites us. Wordle has the power to unite people by competing for who can be the best. Wordle seems easy, which drives people to start playing it, but also can challenge your mind, which keeps people coming back, day after day.