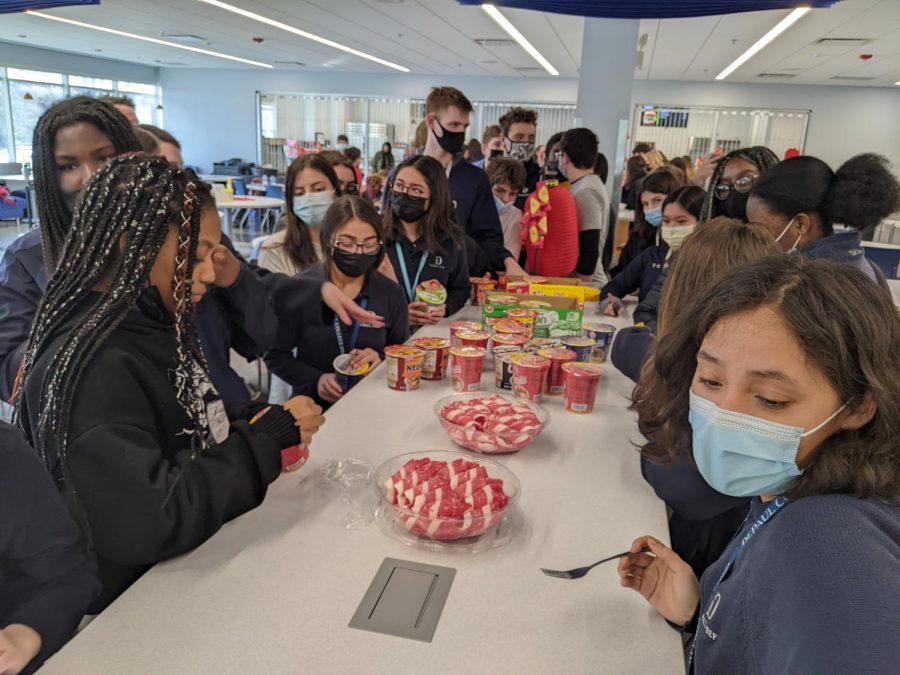 According to folklore, 2,000 years ago in Ancient China Emperor Ming had realized that Buddhist Monks were lighting lanterns on February 15th, 15 days after Lunar New Year. As a practitioner of Buddhism, Ming adopted this tradition across his empire. Today, the Lantern festival marks the end of New Year festivities and is celebrated all over the world with activities, foods, and of course, lanterns. At DePaul Prep, the Asian American Pacific Islanders (AAPI) Club organized their own Lantern Festival tradition, teaching students about different Asian cultures through fun games and of course, delicious foods.

Situated in the dining hall, the room was filled with foods from all over Asia. In the middle sat a Ramen feast bar, with toppings such as Kobe Beef and spices. Specific to the Lantern Festival, a doughy-mochi like treat called Tangyuan was served. Tangyuan is a rice dough ball with black sesame filling inside. Though not every food is welcome at Lantern Festival.

According to Samantha Rodriguez, a member of AAPI club, “They have this very stinky fruit that is allowed in other places but in Singapore it is prohibited.”

Specifically it is called the Durian Fruit and it is illegal to take it on public transport because of its pungent smell.

Not only was the food excellent but the multiple crafts as well, such as the calligraphy station. Here members of the AAPI taught people how to write Chinese characters with a brush.

“We are using magic a brush, you just dip them in water and put them on this very special paper that turns the water black. Chinese has a very specific way to write, you do left to right strokes first, then the up to down strokes. […] If you have a thin side press lightly and if you have a heavier side you press harder. Hold the brush vertically and you’ll have fantastic strokes,” says AAPI member Zoe Pileggi.

During the whole celebration Mando, K- and J-pop played all around including karaoke favorites from Wu Bai, a Taiwanese rockstar, and BTS. It added more to the DePaul celebration that was orchestrated by the AAPI club and its administrators.

“We’ve been doing this since 2018-2019. It turned into a fun little tradition,” says Mr. Corbett, who is the Mandarin teacher for all levels, regarding the history of the Lantern Festival at DePaul Prep. He helped establish this tradition during his first year of teaching, with the help of parents, and other teachers.

This year, the parents of DePaul Prep alum Serena Tran catered with Vietnamese food from their shop. Serena Tran is one of Mr. Corbett’s former Mandarin language students, a freshman at Stanford, and the founder of the AAPI club. Today the club has a multitude of new members.

Sheila Bourke, a freshman and new member, reflects on how she has enjoyed AAPI so far.“It’s been really great, it’s good to be able to get a sense of community of people to understand experiences as an Asian because I never really had that before. I also learned a lot, and now I know a lot more about Asian culture.”