“The hardest working in the group”: DePaul Prep’s athletic captains 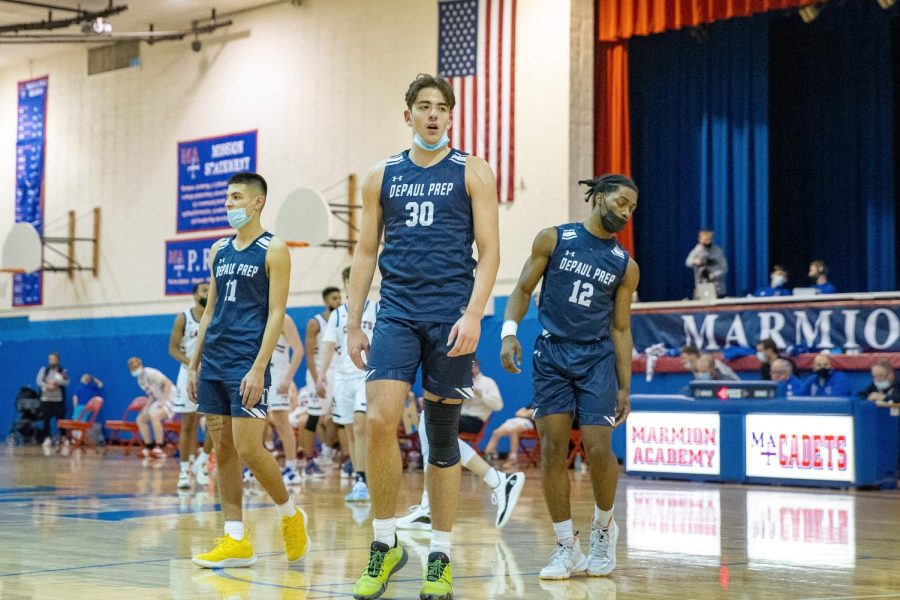 In a sport, three groups of people are needed to make a team: coaches, teammates, and most importantly, captains. But why do sports teams have captains? The title of captain is an honor, but it is not just a name. The captain has significant responsibilities in motivating one’s teammates. At DePaul College Prep, a group of underrated, hardworking, and respectable people connect their team together, in every sport from basketball to cheerleading to wrestling.

The way a captain is chosen depends on the sport. Some sports choose leaders based on their coaches, some pick by team votes, and others self-elect.

On the wrestling team, captains are chosen by the coaches. Coach Rabideau is known for his rigorous training.

“For our team, it’s merit. Coaches will say this is somebody who upholds, people who have the face of our team, [an] example for everybody to follow,”

Coach Rab chose three captains based on their accountability. Accountability is the biggest factor, believing whatever the cause is and being accountable to whatever is necessary for success.

“Accountable is showing up on time working hard in practice,” Rabideau said.

Coach Sneed from the basketball team explained their captains are picked by the team. Each player can vote for three people, and captains are chosen based off of how many votes a player has.

This year’s varsity boys basketball team had five captains because of five seniors, “Dylan, Trey, Alex were one point off each other. Julian Greene was the first place vote. Will was only 5 [votes] away from them, but within the first couple weeks of preseason Will didn’t pout. [He] was the most vocal and his attitude was incredible. [The] Thanksgiving tournament made him 5th captain,” Sneed said.

In contrast, cheerleading captains elected themselves. The most assertive teammates took the position. “On competition we made a strong role especially because we had no seniors. Even with [a] full team we found ourselves making routines and leading in stretches.  [It was an] unsaid thing that we were captains and leaders of the cheer team. [We] needed people to step up so we took that opportunity.”

While all three sports choose captains differently, there was one golden rule every captain followed: communication. Communication has always been the main component for healthy relationships, and this doesn’t stop in sports.

In an interview with three of the five basketball captains, Dylan Arnett stated, “[a captain] is unafraid to say things”. Will Brown and Trey Thomas agreed, adding a captain’s, “gotta call huddles [and] get the group together”.

Yada Rosario, one of three captains on the cheerleading team, explained similar sentiments.

Coach Sneed, even in the basketball world, would agree. He described his captains as “Consistent, one of the hardest things in high school sports. There’s so much changing in their lives, [and] to ask them to be able to perform on a very high-level is sometimes an unfair ask. If they’re not the model then the rest of the group will follow suit. Captains are seen as the ones who score most points, but if they’re not vocal they’re not truly doing their job as a captain of the team.”

Captains Believing in Themselves

Even though some captains are chosen by others, a captain should still feel confident in their abilities to lead the rest of the team.

From the wrestling team, Mikekal McClarin, one of three captains, explained, “I didn’t choose this, it chose me. Be yourself, man. Always trust yourself, man. Don’t let it continue, lead by example, man. [It’s] who I am as a person.”

Luke Walters of the wrestling team explained, “I didn’t even know I was gonna become captain. What qualifies [a captain] is his hard work ethic [and being] the hardest working guys in the group.”

In the basketball team, what makes a captain best in their position is experience. Three of the five captains agreed being “around coaches and [the] system the longest had me step up.”

Anna Barrios from the cheer team had similar acknowledgements as the “past years doing cheer made me comfortable with leading.”

Easily being the toughest questions for all three groups to answer, this question stumped a few of our leaders. Many of our beloved captains have had to lead themselves, so it was hard for them to advise what to do when the captains had never been told how to lead.

With thought, the leaders managed to realize different answers for their advice to future captains.

Michael Skory said, “Just because it’s over doesn’t mean you stop. Pushing people makes you win [because I’d] rather get beat up by a teammate than my opponent. Put people on the right path [and] learn from mistakes, especially for those who are younger.”

Trey Thomas explained, “Build relationships with the younger guys, [and] not be so mean.” In a more brotherly perspective, Will Brown comes from one of six siblings. Brown stated, “My advice for future captains is to be yourself, lead with integrity, [and] seriously care [and] push them to be the best version of themselves.” The cheer team reasoned honesty and words of encouragement as a future captain.

“Coming out just very truthful. Make efforts to make them trust you. Overall, that is the biggest thing. Being captain, leading with trust and respect both ways”, stated Anna Barrios.